Dr. Ed Davis at South Texas Podiatrist has over 30 years of experience in the treatment of work related foot and ankle injuries.

Job related injuries are injuries that occur at the workplace or, possibly off the workplace, if the injured worker was performing duties for the employer related to work duties. For example, an employee who is traveling and becomes injured while performing duties for the employer may have such injuries covered by the employer's workers compensation insurance. Sometimes it may be uncertain. An injury that occurs during a lunch break generally would not be considered covered unless it occurred in the company cafeteria. Off premises injuries may be covered if such injuries occur during the performance of work related duties. The burden of proof may be on the injured worker at times depending on the venue.

Medical treatment for work related injuries is generally not covered by standard health insurance plans so it is important for those injured at work to file a claim with their employers as soon as possible. Occasionally, worker's are uncertain if an injury occurred at work or feel that an employer may look askance at the filing of a claim. The problem is that if the act of filing a claim is delayed, it may be harder to have the claim accepted by the employer's workers compensation carrier.

We generally think of injuries as a specific event, eg. A ladder falls on one's foot at work causing a foot fracture. This example is easy to demonstrate and generally would not be challenged with respect to coverage. Injuries can occur gradually though. A stress fracture, for example,is a fracture that occurs from repetitive overuse. Overuse injuries include problems such as carpal tunnel syndrome which is caused by certain types of actions such as use of keyboards, butchers cutting meat leading to nerve pain in the hand. Certain overuse injuries are well understood such as carpal tunnel but other, less common overuse injuries such as  tarsal tunnel syndrome in the foot. The overuse injuries that are less well researched in terms of how work situations create such injuries can lead to claims being challenged or denied by workers compensation insurance carriers.

The majority of employer's are required by state laws to carry worker's compensation insurance. Some states have such insurance provided via a public or state fund that the employers buy insurance from. Other states may have private workers compensation carriers or a combination of both. Large employers may be self-insured, that is create their own fund to pay for the needs of injured workers from both the medical standpoint and payment for time loss.

Some exclusions to the type of employer based workers compensation insurance may include private contractors as they are not considered employees of those provisioning the work and Federal employees who are covered via the Department of Labor which is a similar system to that provided in the states. There may be other workers excluded depending on the state to include domestic workers, agricultural workers, seasonal workers and undocumented workers. There are also specific programs which have been created such as Black Lung Benefits for current and former coal miners, the Federal Employment Liability Act (FELA) for railroad employees, the Merchant Marine Act for seamen and the Longshore and Harbor Workers' Compensation Act (LHWCA) for private maritime workers.

Seeking medical care for work related injuries
IMPORTANT: Most worker's compensation insurance systems allow the injured worker to seek treatment from the medical provider of their choice. Why is this important? The medical provider need represent the interests of you, the patient and only you. Many doctors are able to see injured workers, not just specific clinics. There are many fine clinics which provide medical care to injured workers but there are a number of “workers compensation clinics” which market to employers based on promises of returning workers back to work rapidly. Injured workers should return to work “quickly” because they have been provided with effective and expeditious care, not provided with “low cost” or minimal care and returned to work. The goal of medical treatment is to return the injured worker to their job with the injury resolved and the level of function that existed before the injury restored – nothing less, nothing more.

If you are injured at work or just need a second opinion on a work related injury, Dr. Ed Davis is here to help. Our office is conveniently located in San Antonio, TX.

Dr. Davis is a Foot & Ankle specialist and Podiatrist, serving the 78258 San Antonia area. Call us to book your appointment today. 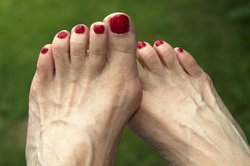 Thank you for subscribing!

You will receive important news and updates from our practice directly to your inbox.